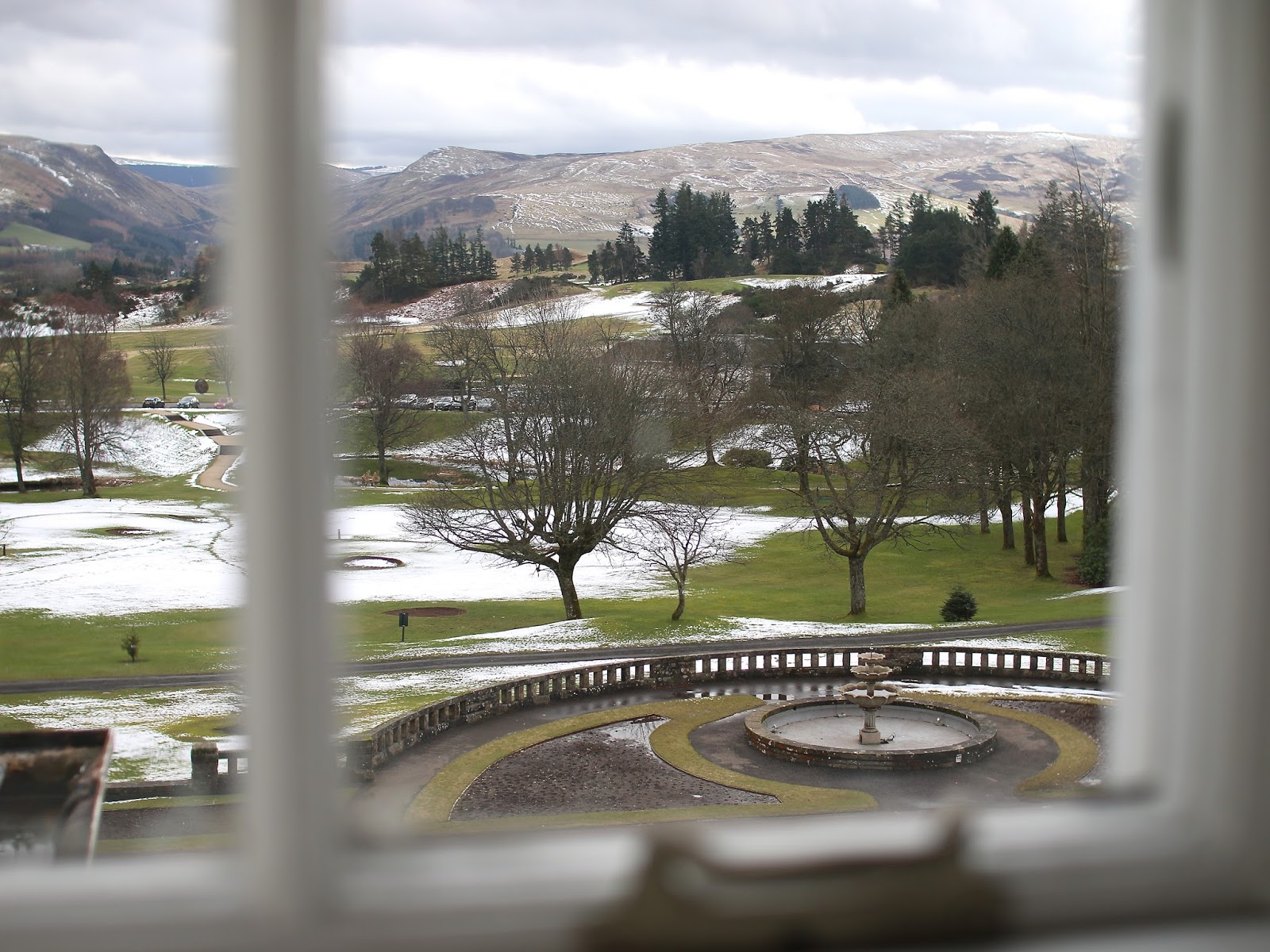 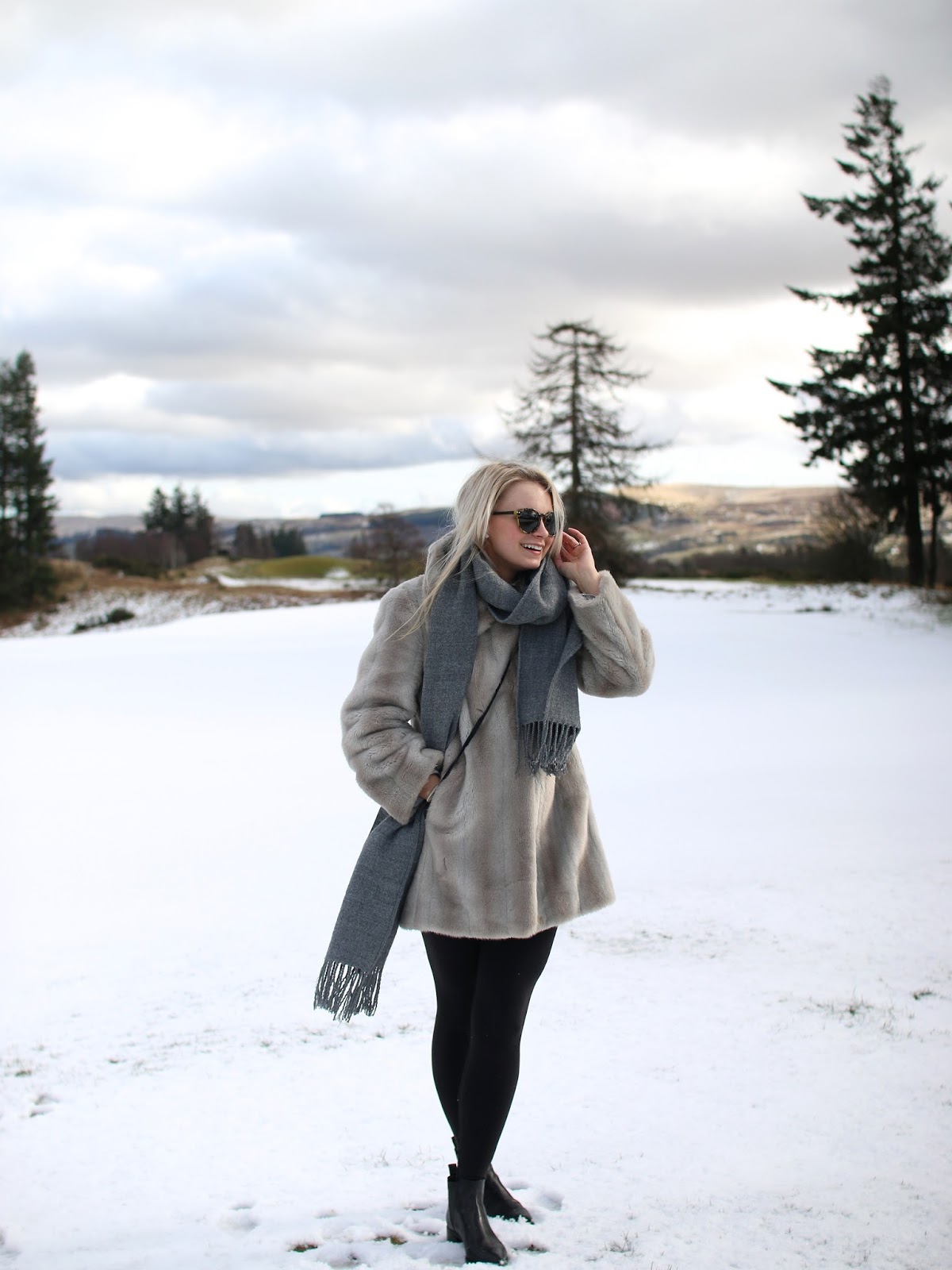 We are going way back in time today. I almost forgot about our Scotland pictures from months ago! I just got so excited about sharing our photos from Spain, that I complexly missed the photos from this trip!

So the story goes : We originally had an entire trip booked to Barcelona. Just a few weeks before we were suppose to leave, we had flown from Vancouver to London and were grilled by immigration when we came back through. I was genuinely scared that we weren’t going to be let in. At one point, we both thought we were going to be shipped back to Canada straight from the airport. Despite being told by several officers that because we are part of The Commonwealth, we don’t require any sort of visa to be in the country, we were still questioned to death. Shaking in our boots.

We had a few weeks to think about what were were going to do about our trip to Barcelona (leave England and risk not being let back in again, or cancel the trip). Leading up to the trip, I was determined to go and risk it and Ken was more than happy to go for it (living on the edge, haha). But the night before the trip, I panicked. What if they really sent us back to Canada? What would we do with our flat? We wouldn’t get to travel the rest of the summer. Ken would have to get back in to finish school and I’d be moving back in with mom! In the end, we cancelled the trip, re-scheduled our Air B&B rental and booked a ticket back home to Vancouver to organize a proper travel visa (even though we were told over and over that we didn’t need it). To say I was disappointed is an understatement. I went from wonderful beach vacation mode to having to unpack and head home to Vancouver to do paper work that was going to cost me a butt load of money!

So, there we were, all packed up and no where to go. Our flight home wasn’t for another week, so we had some time to kill. We started to brainstorm a little and decided we’d use the time to travel elsewhere. Somewhere not too far and where we wouldn’t have to cross any boarders. Scotland seemed most fitting. Ken is Scottish, I had never been and it was a quick train ride away. Done and done. After a quick one night stop in Edinburgh, we hopped on a train to Glen Eagles Resort.  It was one of Ken’s bucket list adventures, so we splurged. Let me tell you, it was glorious. The best accidental trip we’ve ever taken! 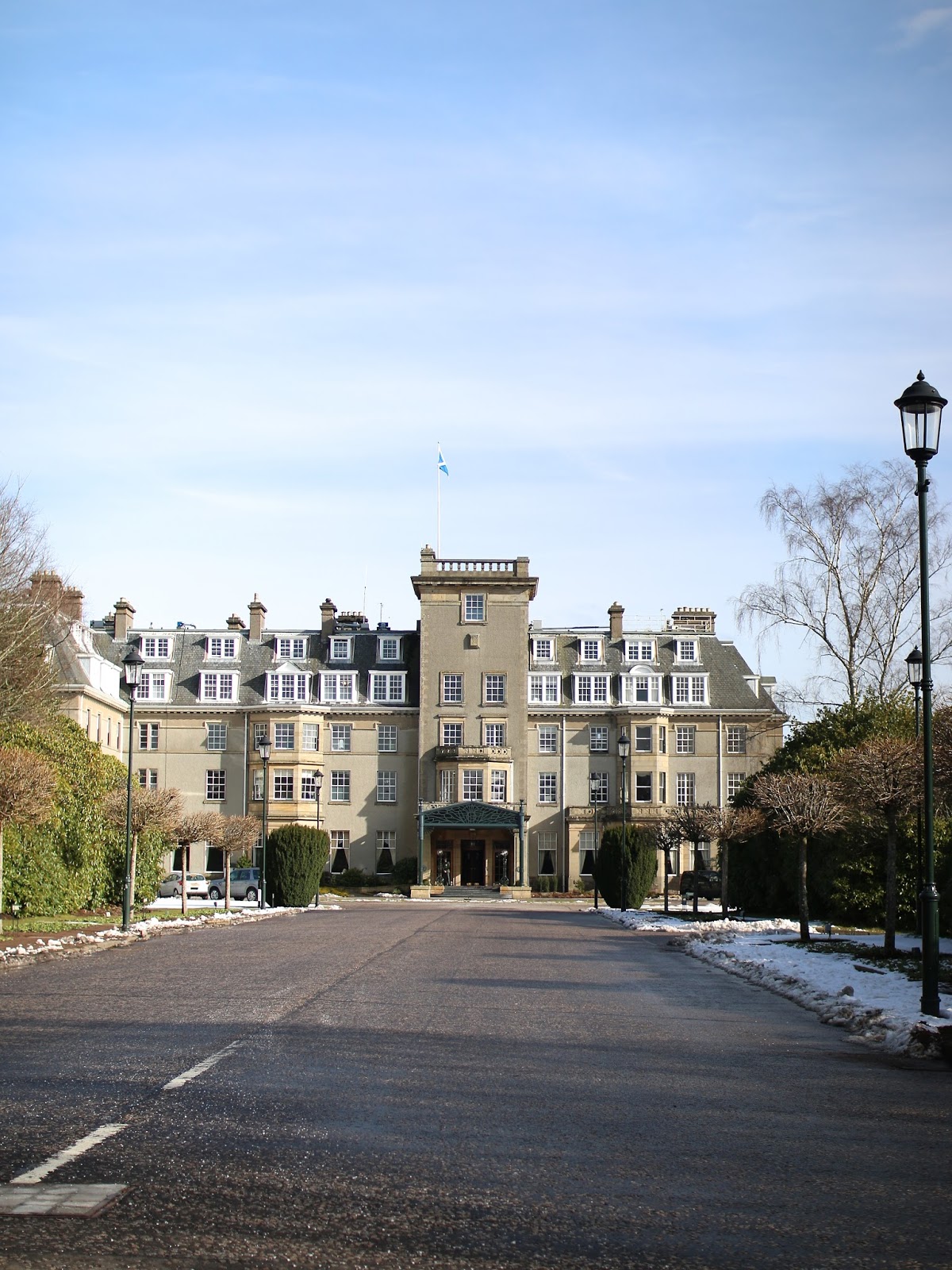 The resort itself it out in the middle of nowhere. There is almost nothing around. The train station we arrived at was completely empty, with the occasional train running by. The resort has a shuttle that comes to pick you up at the station and takes you about 5 minutes drive to the hotel. The front entrance of the resort it pictured above. 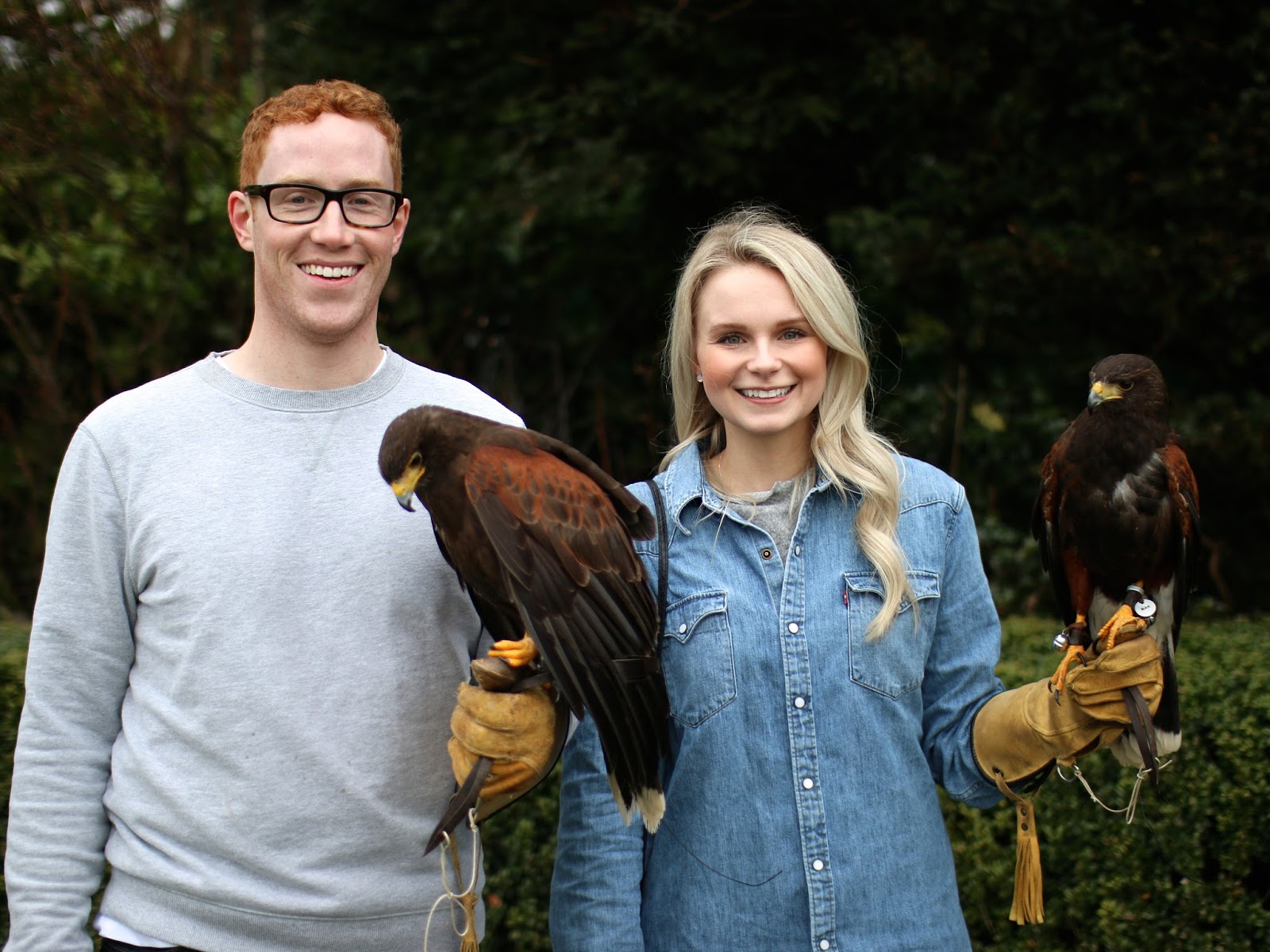 Glen Eagles offers a ton of really cool activities to do during your stay, falconry school was one of them. At first I wasn’t so sure I wanted to do it, mainly because of the price tag, but Ken turned to me and said ” when are we going to be in Scotland with an opportunity to fly hawks ever again?” And its true, probably won’t happen again. So we went for it and it was one of the coolest things I’ve done to date. Since it was off season, we had the hawks and the instructor all to ourselves. Ken also tried clay pigeon shooting, golf (of course!) and I spent a day at the spa. It was all a bit of a day dream stay.  You can watch our Scotland Video HERE to see the hawks in action 🙂 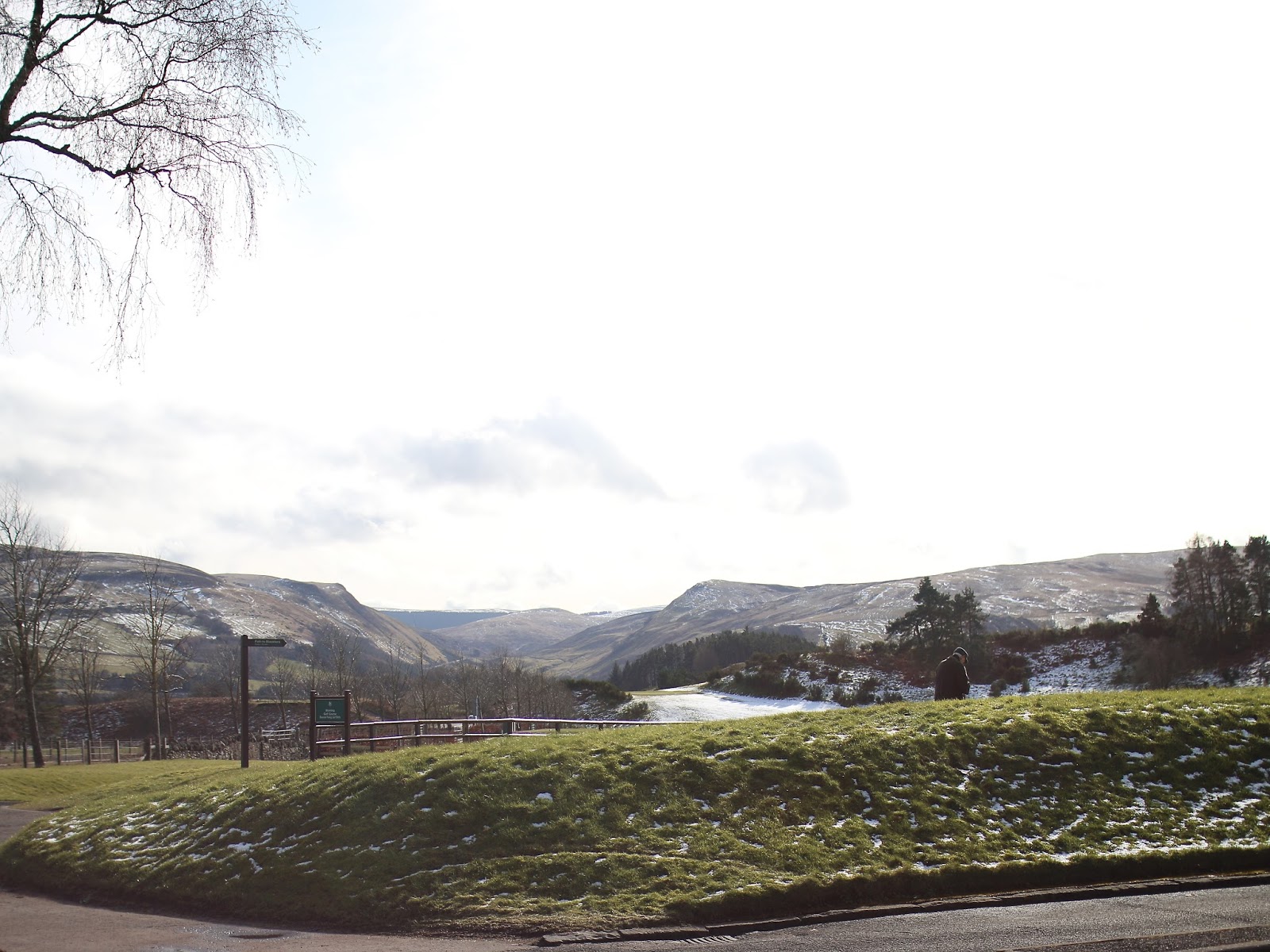 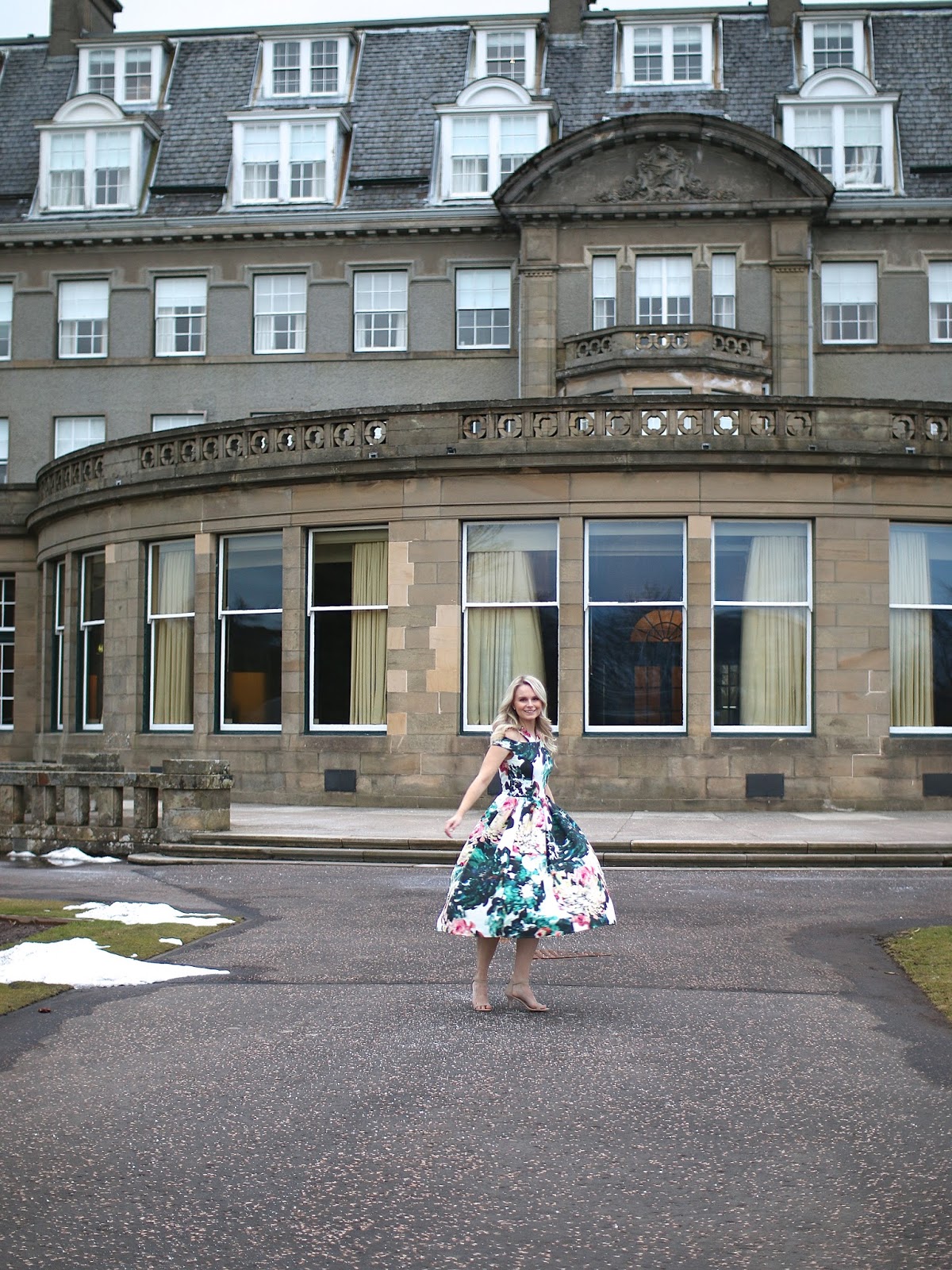 On our second night at the resort, we had booked a table at the “fancy restaurant”. We got all dolled up and spent the night with some delicious food and the most expensive bottle of wine that had ever touched my lips. 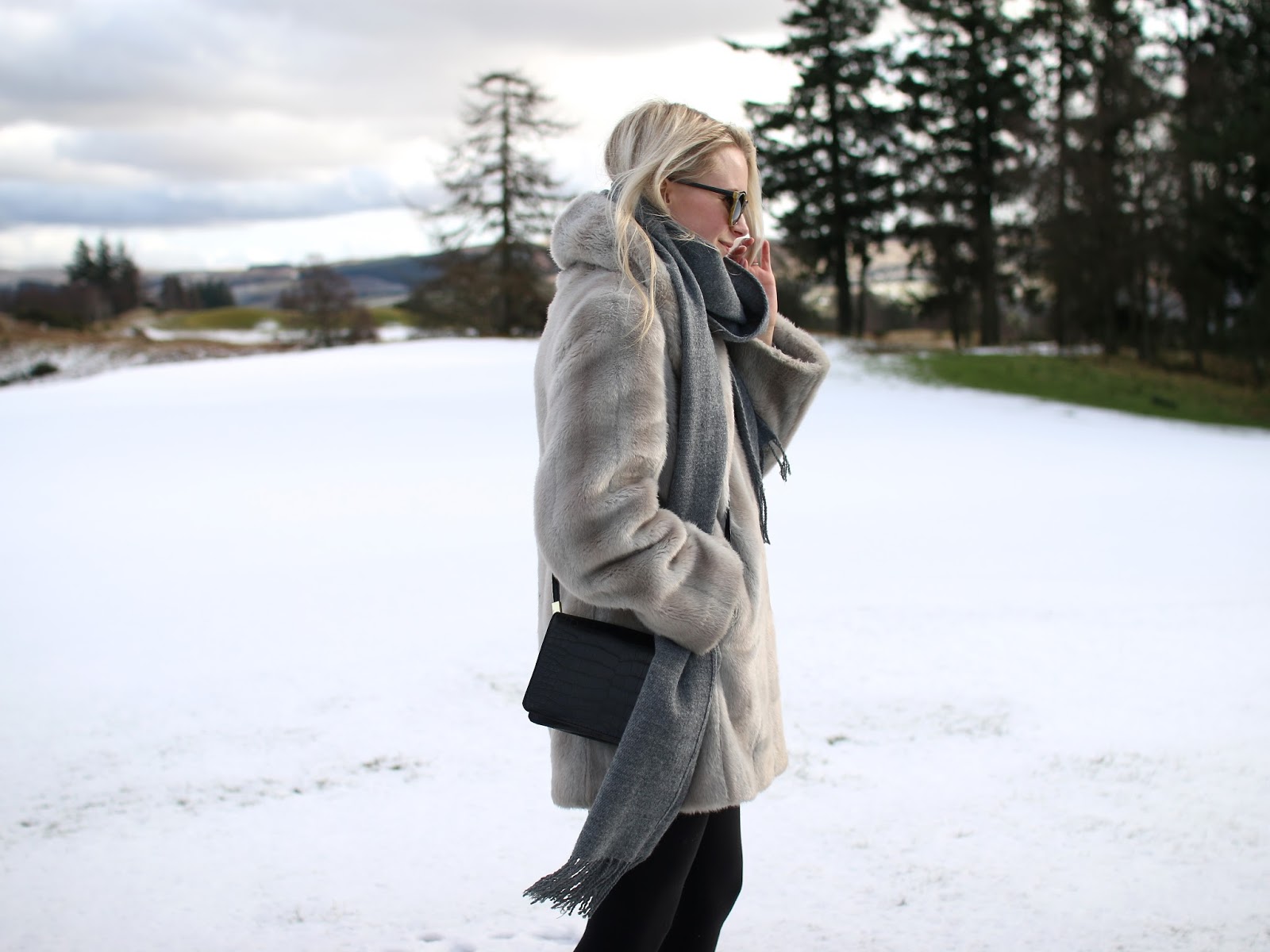 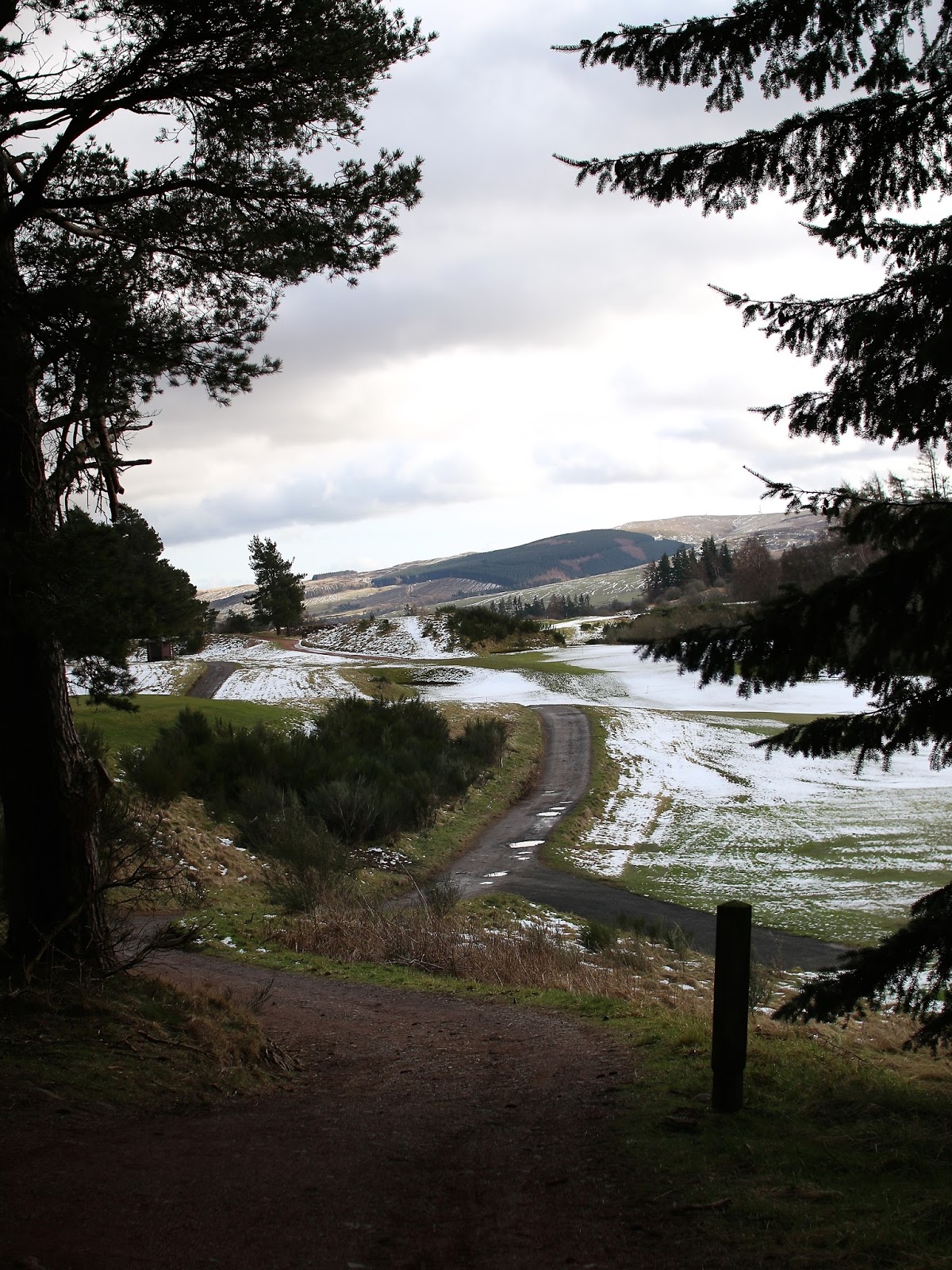 The day we arrived (the above and below photos), the area had experienced a light dusting of snow, which unfortunately closed down the golf course. Ken was pretty devastated but we decided to take a mini tour of the course on bike anyway. Luckily, things cleared on our last morning at the resort and the course was reopened. Once Ken heard he could play, we quickly rearranged our train departure and he hit the golf course! 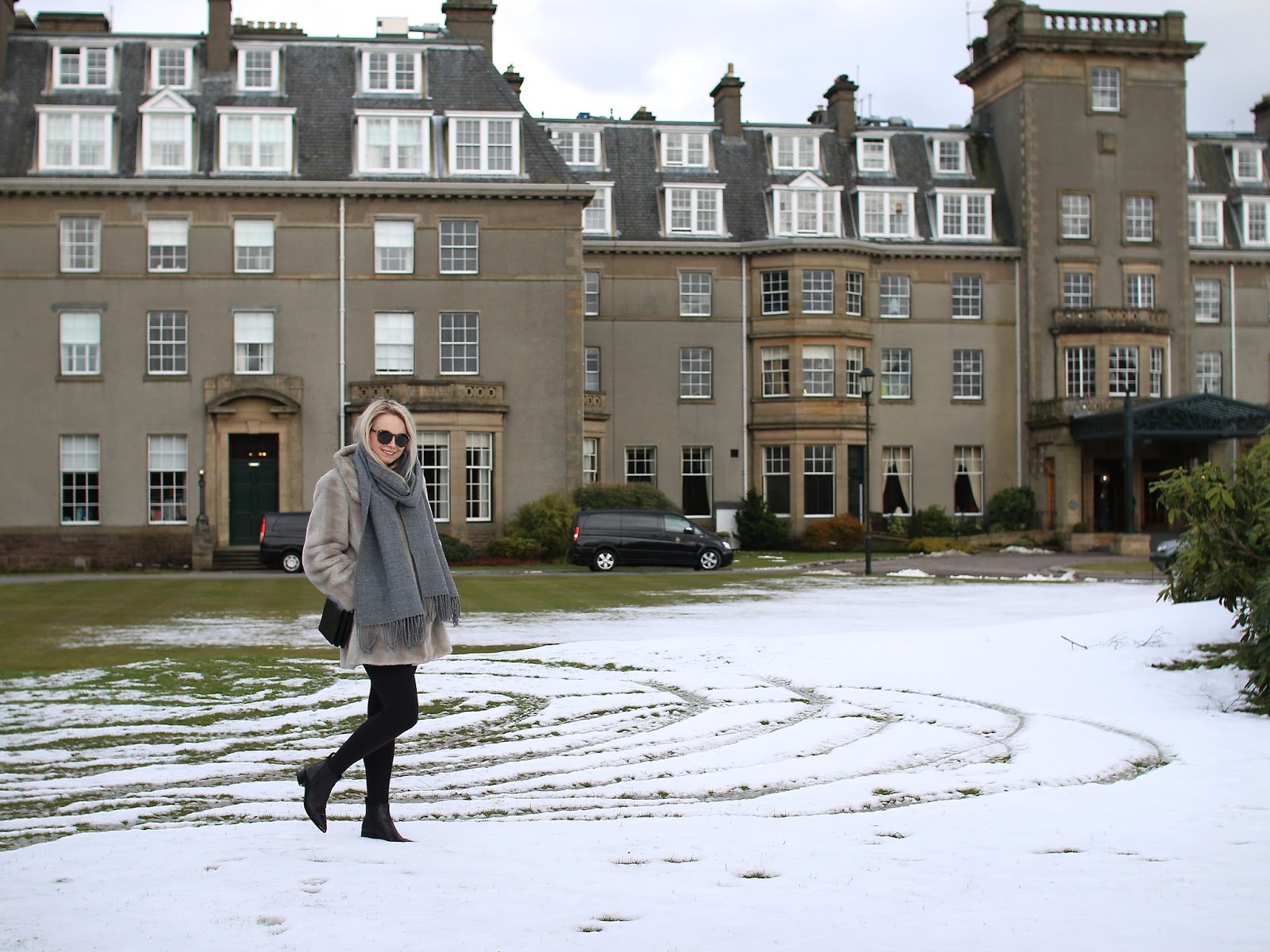 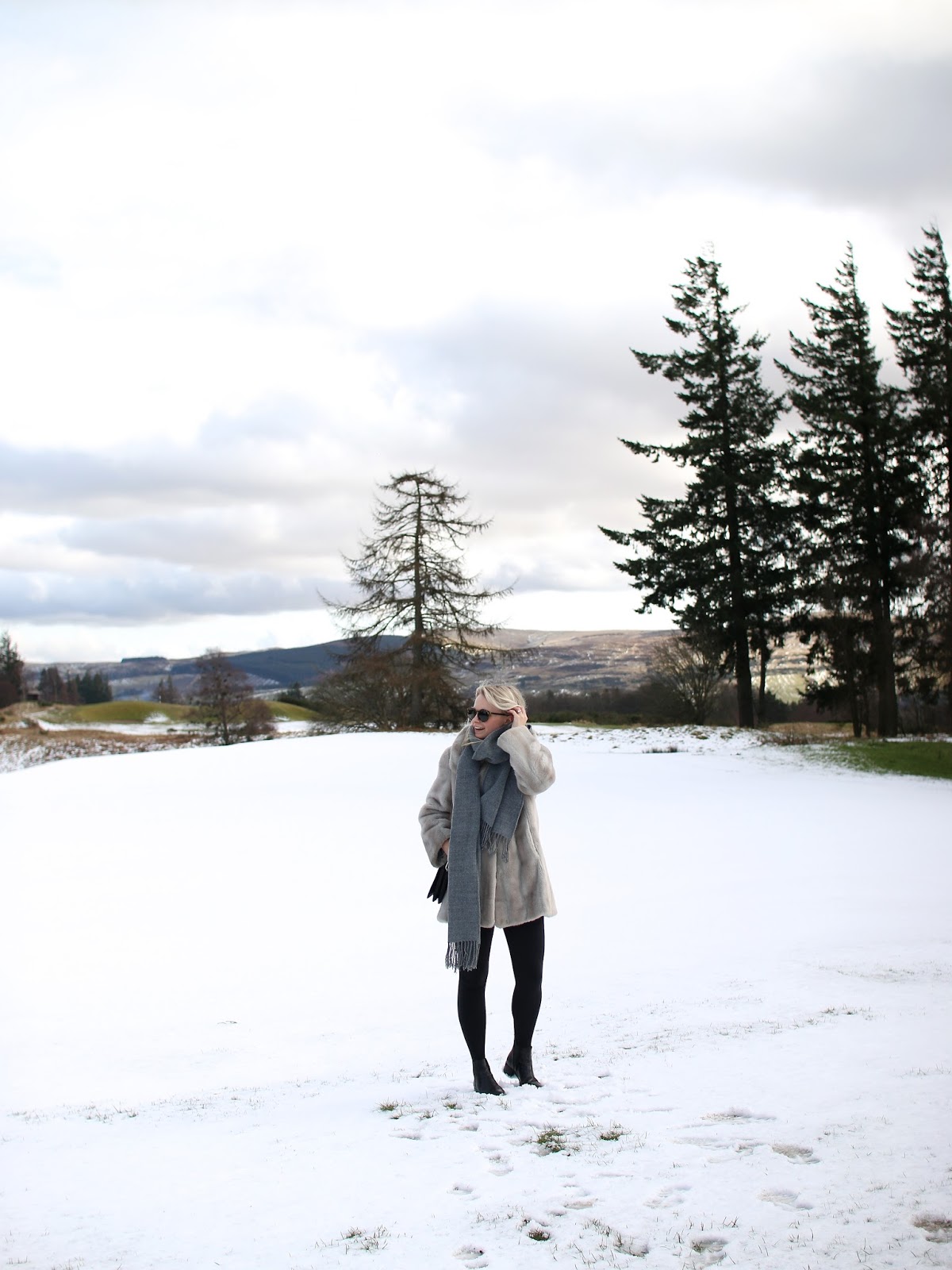 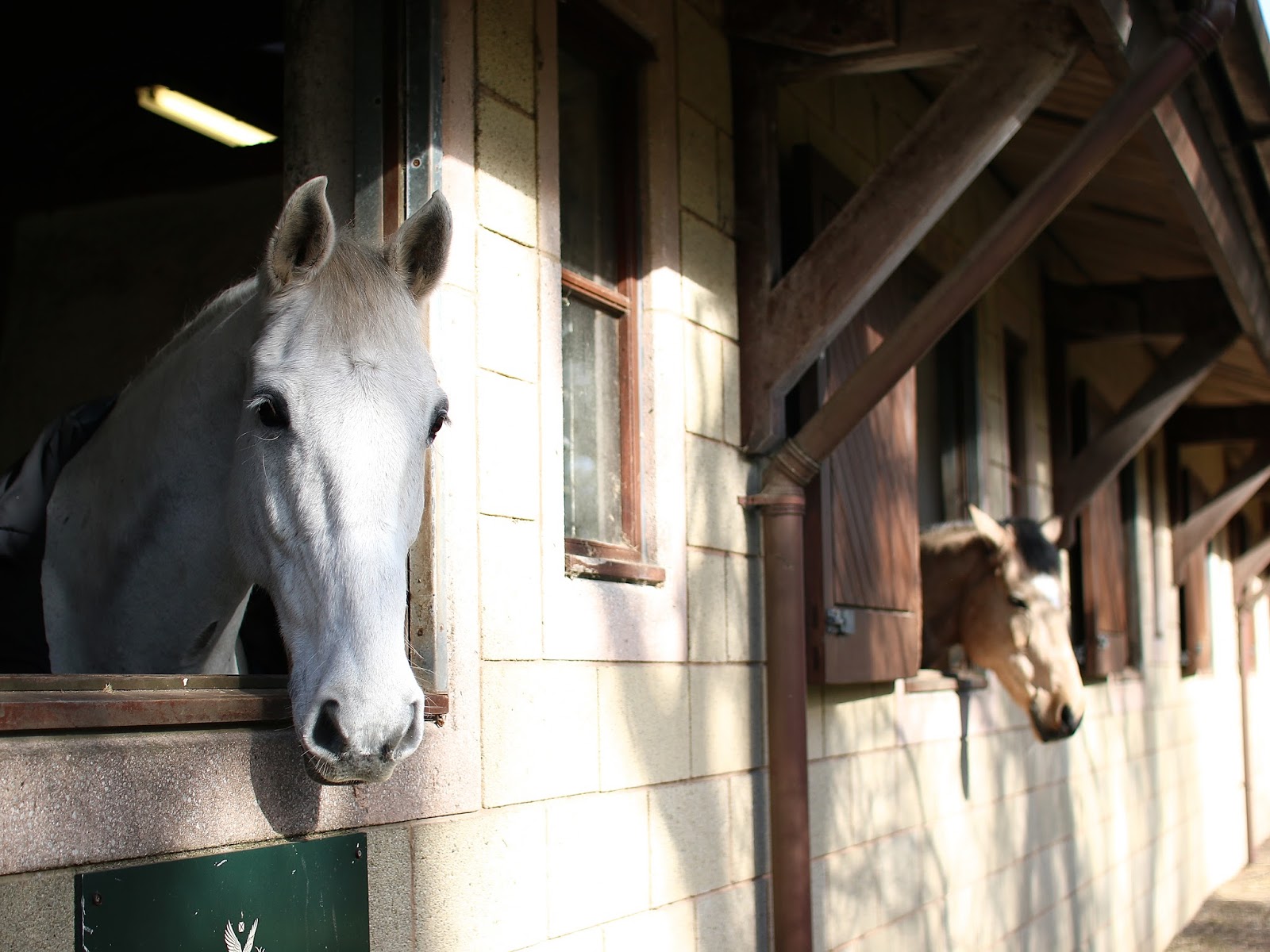 The resort also has a fully functioning stable just a few minutes walk from the main hotel. They offer lessons and trail rides during the summer months, so I was gutted our visit was a little early for the trail ride.  I grew up riding, so I got crazy for all the sounds and smells around a stable. 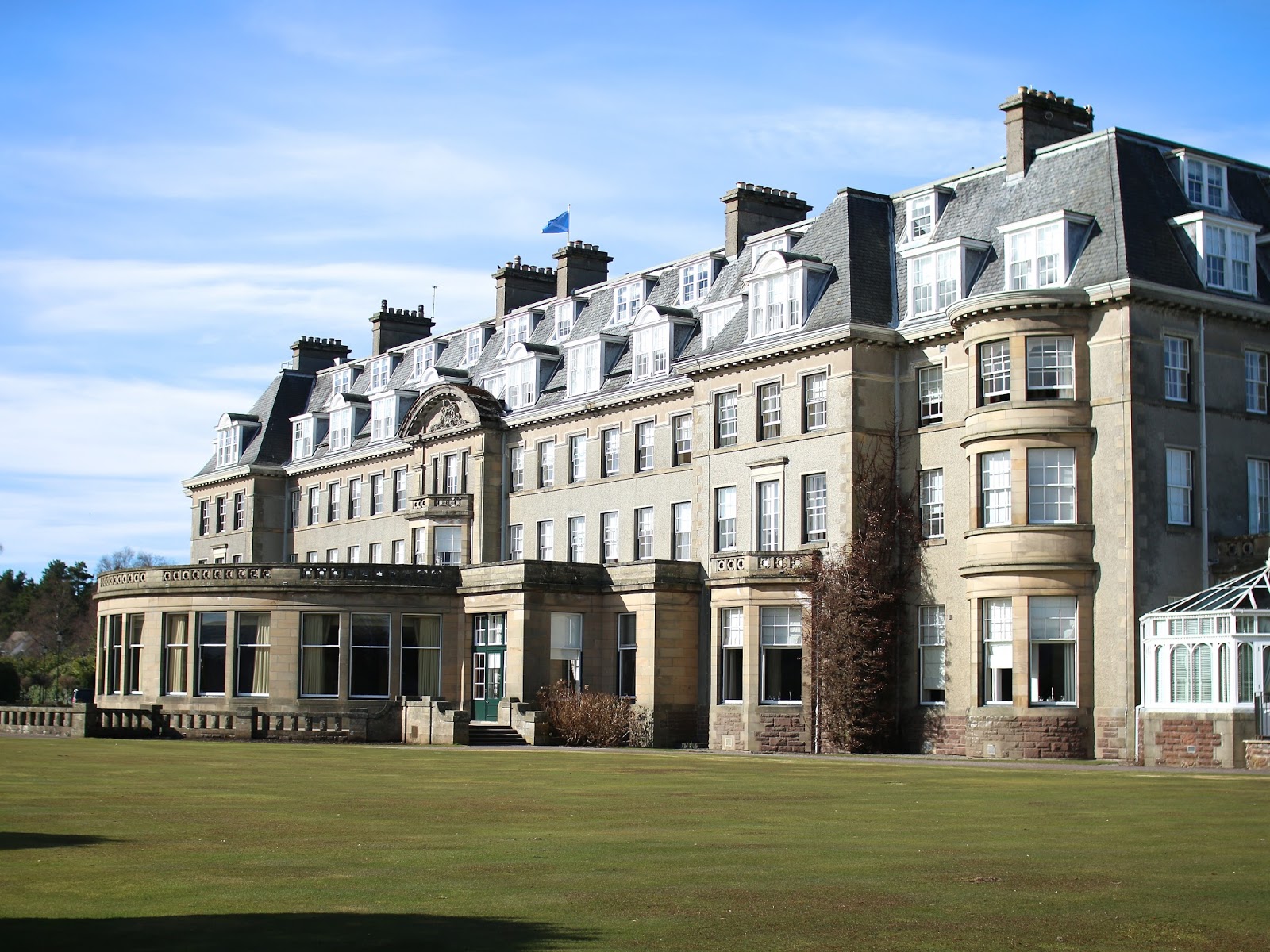 The whole trip was a bit of a fairy tale experience and I would highly recommend a visit, if you ever get the chance. It’s short train ride from Edinburgh, so it’s very easy to get to!

More to come on the dress above, as well as our day in Edinburgh 🙂